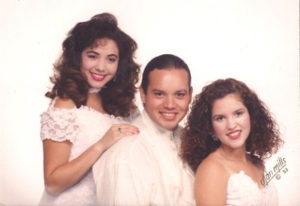 The Portillo’s had three children, Margie, Michael and Marie.  Soon after their youngest daughter was born, Hector was diagnosed with Huntington’s disease. He died in 1989 after being struck by a car while walking.  He was in the late stages of the disease.

As fate would have it, all three of the Portillo children inherited Huntington’s disease.  HD is an autosomal dominant disease and every child of an affected parent has a 50/50 chance of inheriting the disease, so Frances delved desperately into the world of HD research in an effort to save her children.

The Portillo children were strong advocates in support of HD research. After serving as Youth Ambassador for the Huntington’s community for several years, Marie Portillo passed away from HD in 2009. Margie continued advocating for HD research after her little sister passed away, but in 2014 she also lost the battle to Huntington disease. She left behind two children who are now at risk for inheriting HD. Michael continues in his fight against HD, but is currently in the last stages of the disease.

In 2012 Frances spear-headed the start-up of HD-CARE, which provides a source of funding for very rapid HD research at UCI. Soon after she established The Portillo Children Memorial Fund which benefits UCI HD research in the group of Dr. Leslie Thompson and colleagues and the HD Clinic of Dr. Neal Hermanowiczat UCI.

Huntington’s is a “rare” disease, but it is prevalent all over the world. In Orange County there is an estimated Huntington’s disease population of over 300, with many more at risk of inheriting the gene.

Dr. Leslie Thompson’s work, together with her colleagues at UCI, seeks to understand how the presence of the Huntington’s disease mutation affects cells in the brain and to identify ways to treat HD. Her research focuses on strategies to restore the ability of HD neurons to prevent the accumulation of the toxic protein that causes HD, to make appropriate levels of important brain proteins, to “protect” brain cells from further injury, and to restore the activity of the normal Huntingtin protein. Dr. Thompson and colleagues use a variety of systems including cells derived from human HD patient skin samples, fruit flies and HD mouse models to “target” cell processes that they have studied over the years. There is much hope in the ongoing research at UCI to treat this devastating disease.

Dr. Neal Hermanowicz’ HD clinic provides patient care based on extensive knowledge and experience of this disease. His medical team is able to offer HD patients the opportunity to participate in research and clinical trials that enable better understanding of the disease and ultimately will be involved in clinical trials for treatment of Huntington’s disease.